Degenerative Myelopathy, DM (SOD1A)
The dog equivalent of Amyotrophic Lateral Sclerosis, or Lou Gehrig’s disease, DM is a progressive degenerative disorder of the spinal cord. Because the nerves that control the hind limbs are the first to degenerate, the most common clinical signs are back muscle wasting and gait abnormalities.

Multiple Drug Sensitivity (MDR1)
Sensitivity to certain classes of drugs, notably the parasiticide ivermectin, as well as certain gastroprotectant and anti-cancer medications, occurs in dogs with a mutation in the ABCB1 gene.

Hemophilia A (F8 Exon 11, Shepherd Variant 1)
Factor VIII deficiency (Hemophilia A) is a type of coagulopathy, a disorder of blood clotting. Dogs with this disorder can bleed spontaneously into their chest, abdomen, or joints. They will also develop significant bruising and profuse bleeding following a trauma or surgery.

Hemophilia A (F8 Exon 1, Shepherd Variant 2)
Factor VIII deficiency (Hemophilia A) is a type of coagulopathy, a disorder of blood clotting. Dogs with this disorder can bleed spontaneously into their chest, abdomen, or joints. They will also develop significant bruising and profuse bleeding following a trauma or surgery.

Platelet factor X receptor deficiency, Scott Syndrome (TMEM16F)
Canine Scott Syndrome is a defect in platelet function leading to impaired secondary hemostasis. Secondary hemostasis occurs after a platelet “plug” has formed. Its role is to make the plug stable by adding fibrin to the clot. Dogs with CSS have platelets that cannot signal in response to stimuli to induce platelet activation or death.

Day Blindness (CNGA3 Exon 7 German Shepherd Variant)
Achromatopsia is a progressive, non painful disorder of the retina that affects color vision and light perception. Cone cells not only register color, they allow the dog to adjust their eyes to bright light. Dogs with this disease constantly feel like us when we step out of a movie theater. Night vision remains completely unaffected.

Urate Kidney & Bladder Stones (SLC2A9)
This condition causes kidney and bladder stones composed of urate. In most dogs, uric acid is converted to allantoin, an inert substance that is then excreted in the urine. Dogs with HUU have defects in the pathway that converts uric acid to allantoin. As such, uric acid builds up, crystallizes and forms urate stones in the kidney and bladder. Uric acid is an intermediate of purine metabolism. While hyperuricemia in other species (including humans) can lead to painful conditions such as gout, dogs do not develop systemic signs of hyperuricemia.

Anhidrotic Ectodermal Dysplasia (EDA Intron 8)
XHED has been mapped to a mutation in the EDA gene, leading to a defective ectodyplastin protein, which is known to play a role in hair follicle and tooth bud development. This developmental condition can cause a scanty hair coat, malformed teeth, and few or absent sweat glands.

Mucopolysaccharidosis Type VII, Sly Syndrome, MPS VII (GUSB Exon 3)
A lysosome is a structure within the cell that digests and removes waste. When the lysosome cannot recycle waste properly, the waste accumulates and causes the cell to die. Mucopolysaccharidoses (MPS) are defined by abnormal buildup of glycosaminoglycans, large sugar-protein molecules that are important for skeletal and joint function.

ALT Activity (GPT)
Alanine aminotransferase (ALT) is a clinical tool that can be used by veterinarians to better monitor liver health. This result is not associated with liver disease. ALT is one of several values veterinarians measure on routine blood work to evaluate the liver. It is a naturally occurring enzyme located in liver cells that helps break down protein. When the liver is damaged or inflamed, ALT is released into the bloodstream.

Hip dysplasia, HD
It is a degenerative condition that develops in around 15%-20% of all German Shepherds. This condition can form as a puppy or develop later in life and can be accelerated by injury, obesity, and over-exercise.
It’s the result of a subluxation on the femoral head of the hip bone caused by a loose hip joint. The stress and damage are caused by the ball and socket which is partially dislocated resulting in the bone wearing and tearing against one another leading to inflammation, degeneration, and osteoarthritis.

Elbow dysplacia, ED eller AD
Elbow dysplasia is an inherited condition that can occur in most dog breeds but is most commonly seen in large to giant breed dogs. It has been noted to affect both elbows in up to 80% of patients. Bernese Mountain Dogs, German Shepherds, and Golden retrievers among others are predisposed to UAP while Labrador retrievers, German Shepherds, and Golden retrievers have an increased predilection among other breeds for developing medial compartment disease.
Canine elbow dysplasia (ED) is a condition involving multiple developmental abnormalities of the elbow joint. The elbow joint is a complex joint made up of 3 bones (radius, ulna, and humerus) (figure 1). If the 3 bones do not fit together perfectly due to growth abnormalities, abnormal weight distribution on areas of the joint occur causing pain, lameness, and the development of arthritis. Elbow dysplasia is a disease that encompasses several conditions grouped into medial compartment disease (fragmented coronoid process (FCP), osteochondrosis (OCD), joint incongruity, and cartilage anomaly) and ununited anconeal process (UAP). The cause of ED in dogs remains unclear. There are a number of theories as to the exact cause of the disease that include genetics, defects in cartilage growth, trauma, diet, and so on. It is most commonly suspected this is a multifactorial disease in which causes the growth disturbances.

Osteochondritis Dissecans (OCD)
The term osteochondrosis refers to an abnormal development of the cartilage on the end of a bone in the joint. Osteochondritis dissecans (OCD or OD) is an inflammatory condition that occurs when the diseased cartilage separates from the underlying bone. It most commonly affects the shoulder joint, but the elbow, hip, or knee (stifle) may also be involved.
Which breeds of dogs are likely to be affected by this condition?
This is a developmental disease that occurs in rapidly growing large breed dogs typically between 6 and 9 months of age and tends to occur more often in male dogs. The cause of OCD is unknown.
However, this disease is more common in dogs receiving too much energy and calcium in the diet. Other factors may also include genetics, rapid growth, trauma, lack of blood flow, and hormonal factors. 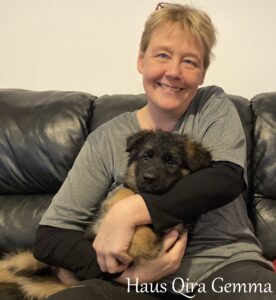